We’ve been talking a lot recently about the new Jeep Wrangler as well as reminiscing about the great Jeeps of past. Lest we not forget, however, that although the Wrangler is, more or less, in a class of its own, It had some formidable competitors along the way. The most recent entrant in the “medium-sized, purpose-built on/off-road runabout” class in the rough-and-ready yet curiously styled Toyota FJ Cruiser. 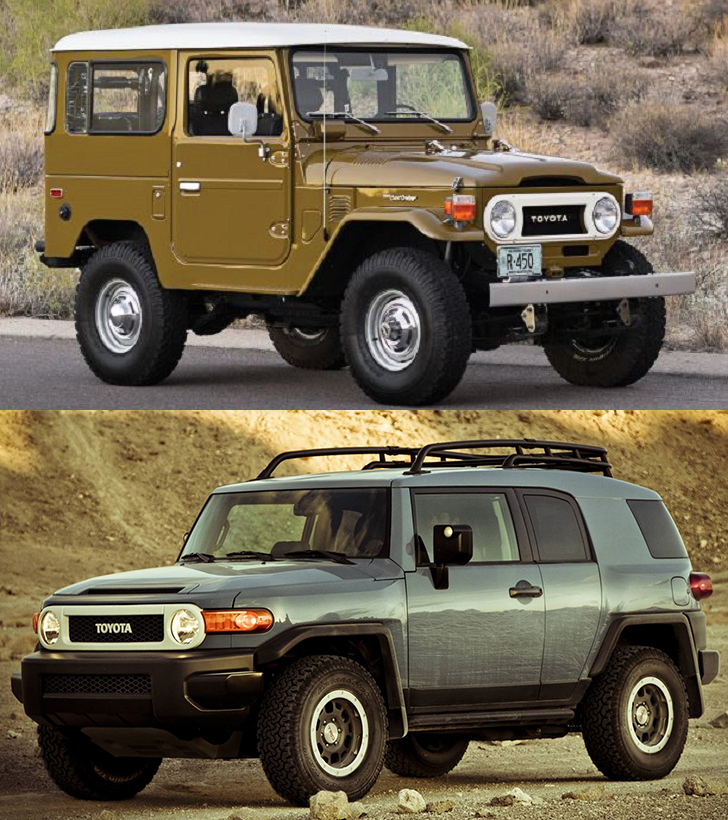 Roughly the size of a JK Wrangler Unlimited, the FJ is built on a version of the Land Cruiser Prado chassis, which is Toyota’s answer to the Land Rover Discovery in overseas markets and the basis for such stateside SUV’s as the 4Runner and the Lexus GX. It featured Toyota’s corporate 4.0 liter V6 and, on manual transmission models, a super-slick Torsen center differential. Also optional was an electronic hill descent control that modulated the antilock brakes to limit your crawl speed as you creep down an embankment.

Styling cues drew heavily from the original FJ-40 Land Cruiser that debuted in 1960 and, in my opinion, presented a couple of nuisances in the visibility department. The first is the short, upright windshield in tandem with a deep, modern dashboard filled with things like airbags and climate control systems that actually work. This adds up to the windshield feeling miles away from the driver and a roofline that annoyingly blocks things like traffic lights and road signs.

The other is the disproportionately fat B-pillars, presumably put there to structurally compensate for the funky suicide doors that facilitate rear-seat entry. As a result, you end up with a couple of awkward blind spots when you’re trying to wiggle through a tight area. Neither of these complaints are major and they were otherwise well-equipped and as excellently-constructed as any other Toyota truck.

Like the Wranglers, they hold their value extremely well with the manual transmission models commanding a slight premium. They lack the solid front axle of the Wranglers but still are extremely capable in their own right. They’re also extremely reliable and, thanks to the full hardtop, are a lot less noisy and susceptible to wind leaks than their Jeep counterparts.

Check out our YouTube channel where I install a leveling kit and a differential drop onto a 2014 Toyota FJ Cruiser belonging to our friends over at McLeod Racing.